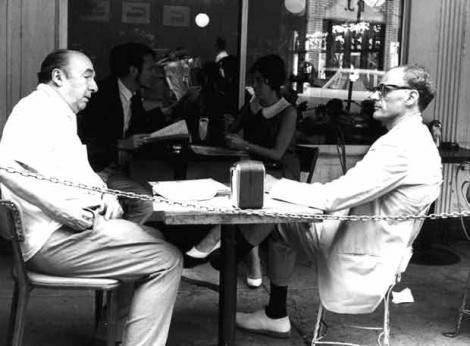 Splendor and death of Joaquín Murieta (1967): Neruda’s only dramatic work.

When a prominent person is commemorated, especially if he is a great writer, painter or musician, various activities are usually carried out and his work is reconsidered from new perspectives, which shed new light on his understanding and update his contribution to a discipline. Accordingly, the commemoration of the 50th anniversary of the Nobel Prize for Literature conferred to Pablo Neruda in 1971 is an invitation to reread, study and analyse his work, and to value those parts that merit it.

In the context of the extensive creation of Neruda’s, The Splendour and Death of Joaquin Murieta is particularly interesting: it is a dramatic work which has versions in theatre and opera. Pablo Neruda defined it as follows: “This is a tragic work, but also, in part, it is written as a joke. It would like to be a melodrama, an opera and a pantomime”. Although it is understandable that the study of his extensive and profound poetic work occupies almost all the academic articles and books dedicated to his literary creation, it is also fair to take this particular work into consideration as well.

In 1966, Pablo Neruda published this only dramatic work with Editorial Zig-Zag, which launched its first edition with 10,000 copies, of which my parents – great readers – acquired number 7,076, which they kept in their library. In 1967, it was presented as a theatrical work for the first time at the Antonio Varas Theatre. Then, Neruda commissioned the music by the composer Sergio Ortega, who worked developing the aesthetic ideas of the text. As an opera, it was premiered at the Municipal Theatre of Santiago in 1998.

The play, set in 1850 during the gold rush, begins in Valparaíso when Joaquín Murieta embarks for California, seeking a better future. On the way, he marries Teresa, a Chilean from the countryside. It is a love match, so the couple legitimately wants to start a family. However, upon reaching California, the “greyhounds” (North Americans) rape and kill Teresa. This experience causes unfathomable pain in Joaquín Murieta, who responds with fury, transforming himself into a famous bandit motivated by revenge, until he is killed.
From a dramatic perspective, first, we note that it is a work that responds to the traditional structure proposed by Aristotle in Poetics, so that its aesthetic codes (unity of action, presence of incidents, anagnorisis, etc.), are readable by an international educated public.

When studying the work with the method of analysis of dramatic situations, established by Etienne Souriau in Le 200.000 situations dramatiques, it fully responds with the oriented force, the object desired, desired subject, opponent, assistant, and referee, that is, the six abstract forces that participate in the dramatic tension which is resolved at the end, immediately after the climax.

Second, we address the level of symbols and motifs. As for the symbols, the sea is the main one, which is complemented by the ship. In this journey, which is a symbol of life, we find a gallery of diverse characters.
Regarding the literary motifs, as we know, they have two meanings: as elements that move the dramatic action (since the motive comes from the Latin muovere) and also as recurring elements of the play. Now, in this particular case, in its first sense, we find love, greed, destiny and, in its second sense, we find travel, friendship, and revenge. These and other elements are intertwined in such a way around a central axis, which ultimately determines the theme: the eternal struggle of good and evil, which are present throughout the whole story.

Third, the litmus test of any literary work is time. In this case, it is still valid in the tradition -innovation duality. Indeed, our poet and his playwright bring together elements of Greek theatre, such as the presence and role of the choir within the dramatic structure, as well as the tragic destiny of the protagonist and qualifies it with elements of the Noh theatre that he saw in Yokohama; all of this, set on the ship and later in the city of San Francisco, California in 1850. Certainly, the result is original and well achieved. More than 50 years have passed; however, this piece is still full of meaning, maintains its liveliness and carries an ever-living message.

Based on the foregoing, we can assert that Neruda’s only dramatic work, has several levels of meaning: literal, symbolic and mythical, because by turning Joaquín Murieta into a tragic hero and elevating him to the category of Chilean myth, placed it in an abstract and perennial setting.

This play is key to establishing that Neruda was a complete writer, as he cultivated the lyrical, narrative and dramatic genres, always with different nuances, talent and great sensitivity. He also possessed knowledge of the literary tradition and knew how to update it with his vision, which allowed him to be part of the pantheon of world literature.