Librarian, specialist in ancient books. Curator of cultural exhibitions. Member of the Società Bibliografica Toscana. Responsible for this project in Italy.

Neruda had admired Tallone’s editions since the 1940s. In 1939, he was appointed as the Consul in Paris (for Spanish immigration), at the time that Tallone had started his own publishing house by taking over the prestigious Maurice Darantière printing workshop.

However, the first meeting between the Chilean poet and the Italian publisher took place in Italy in 1962, when Neruda wanted to entrust Tallone with the unpublished collection of stories titled “Summary. Book where the rain is born”. The introduction to the collection was printed using handmade characters designed by Alberto Tallone, and Neruda expresses with these words his admiration for the originality of his editor friend: “Now this bouquet of Antarctic shade must be arranged in the beautiful typography to deliver its harshness to Tallone, master of supreme clarity, to illuminate understanding. I never thought, in the solitude where I originated, that I would achieve such honour, and I give these incomplete pages to the virtue of the great printer as when in my childhood I discovered and opened a wild honeycomb in the mountains. I knew then that the wild honey that scented and flowed in the tormented tree was housed in linear cells, and thus the secret sweetness was preserved and revealed by a fragile and firm geometry”. (Valparaíso 1962).

The meeting was special due to the presence of a steam locomotive that is still preserved (on real tracks) in the garden of the Tallone Press and which was the setting for their first meeting; a breath of steam welcomed the poet and his wife Matilde Urrutia and made this meeting even more significant.

To celebrate the 50th anniversary of Pablo Neruda’s Nobel Prize, the Tallone publishing house has recently completed a careful restoration of the locomotive so beloved by the poet. “Summary” was followed by another first edition – “The Blood Cup” – which was also composed and hand-printed by Tallone Press in a limited edition of 507 copies. The volume contains the ode “Goodbye to Tallone”, dedicated to Alberto who had died a year earlier, at the age of 70. From the highest point of his poetic inspiration, Neruda concludes the ode with these words; “Goodbye, Alberto Tallone, great editor, dear friend: before you had the light in your eyes, now the night travels in them. But in your books, castles of man, beauty and clarity continue to shine: through those windows the night will not enter. “

The following is a quote from the interview with his son Enrico Tallone, conducted by Fabrizio Fantoni, http://poesia.blog.rainews.it/2014/09/enrico-tallone-larte-di-fare-i-libri/

“The memories I have of the great poet are those of a man with the voice of a lamb who loved life and valued work, singing about it with brave and comprehensible words that made it universal. The son of a train conductor, he was thrilled to find a steam locomotive whose engine my father had ignited in his honour in his publisher’s yard. That is why Isla Negra still stands today with a steam locomotive that he wanted to place in front of his house-museum. “
The Stockholm Speech, published in 1972 on the occasion of the awarding of the Nobel Prize for Literature (October 21, 1971), was also published by the Tallone Press with the first edition in Spanish, followed by the Italian translation in 1999.

After Neruda’s death, Matilde sent Bianca Tallone the unpublished “2000”. Bianca, who had been widowed and had to run the publishing house with two young children, was forced to put the project aside at that time. Printed in 1974 by Editorial Losada in Buenos Aires, it appeared in Tallone typefaces in 2004, on the occasion of the centenary of Neruda’s birth. That edition of “2000” also contains the moving Matilde’s letter from 1973, and was composed and typeset by hand, and 360 copies were printed on pure Sicilian cotton paper.

The “Ode to Typography” appeared in Santiago de Chile in 1956 in Spanish, published by the Nascimento publishing house, and the first Italian edition dates from 1983. As soon as the 156 copies were released by the Piedmontese press, it became unattainable. The edition was in quarto format, composed by hand in Caslon font which originated in the 18th century. It was composed by the brothers Aldo and Enrico Tallone in memory of the poet and in memory of their father Alberto. It is part of “The Elemental Odes”, also important because they were conceived by Neruda during his productive stay in Capri. This is what Pablo Neruda wrote in this poem: “Letters, / continue to fall / like necessary rain / in my path. / Letters of everything / what lives / and dies, / letters of light, of moon, / of silence, / of water, / I love you, / and in you / I gather / not only thought, / and combat, / your clothes, / the senses / and the sounds: / A / of glorious oats, / T / of wheat and tower / and M / as your name / of apple.” And even though, when the verses were written, the meeting with the printer was still far in the future, in “Ode to Typography” he pays an explicit tribute: where A and T refer to the initials of the future friend, while M refers to beloved Matilda. “Ode to Typography” was reprinted in 2010 in a limited edition of 220 copies in Octavo format hand-composed with fonts created by Alberto Tallone. It contains, in addition to Goodbye to Tallone, the unpublished speech made by Pablo Neruda at the opening of the Tallonian exhibition in Santiago de Chile in November 1970, entitled “Tribute to the book and Alberto Tallone”, and also a study by Maurizio Nocera.

By virtue of the sincere friendship between Pablo Neruda and Alberto Tallone, and the work carried out together, publication (perhaps by Tallone) of a work not previously published would be desirable for the fiftieth anniversary of the great poet’s death in 2023.

Alberto Tallone (1898-1968), Italian publisher and printer, was the son of the painter Cesare Tallone and the poet Eleonora Tango. From 1932 he was an apprentice at the Maurice Darantière printing house in Châtenay-Malabry, dating from the late 18th century. In 1938 he took over, and then went on to found his own publishing house: Alberto Tallone Editore, based in Paris. Starting in 1957, he moved the publishing house to his maternal property in Alpignano, near Turin. During the sixties, Pablo Neruda visited Alberto, who published three works for Neruda in the first worldwide edition. Printing was carried out after his death by his widow, Bianca, and his sons Aldo and Enrico Tallone. The printing house is currently managed by Enrico, assisted by his wife María Rosa, along with their children Eleonora, Elisa and Lorenzo. 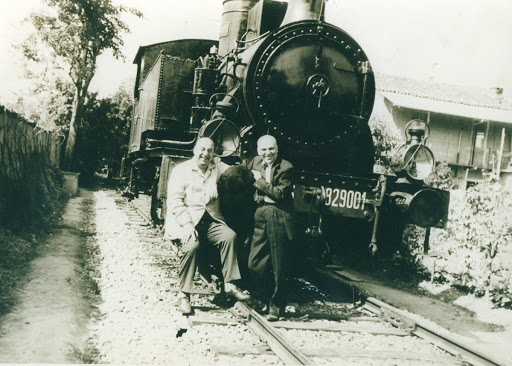 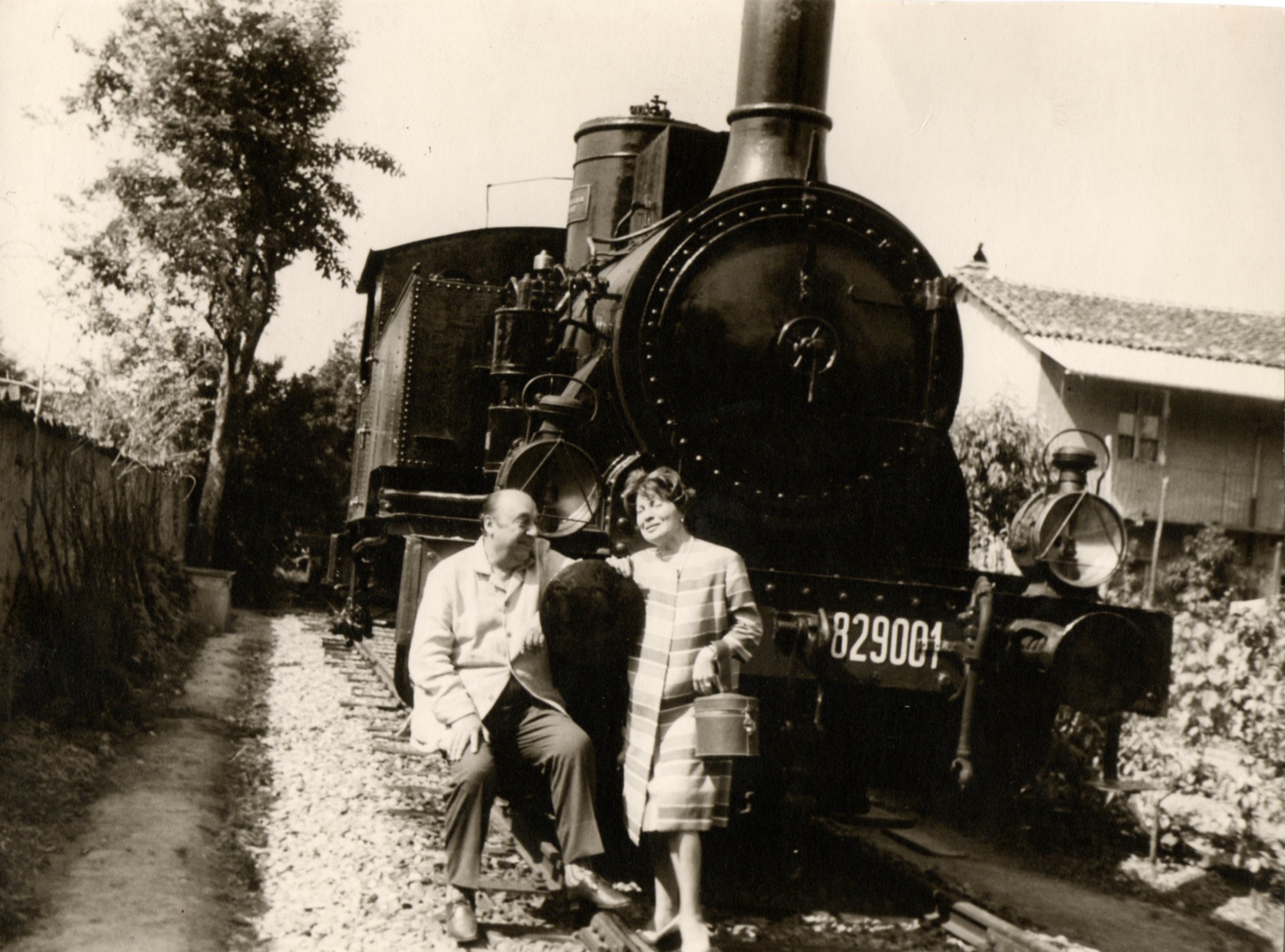 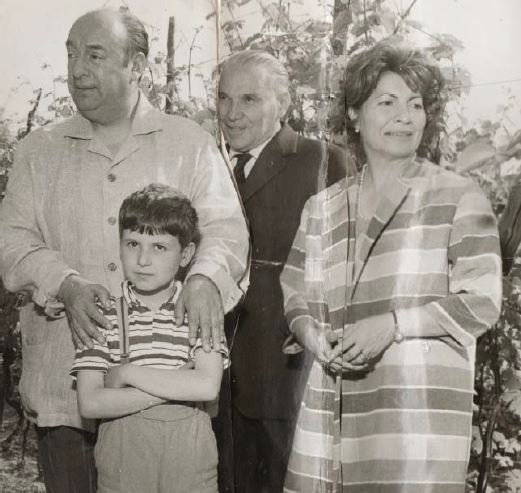 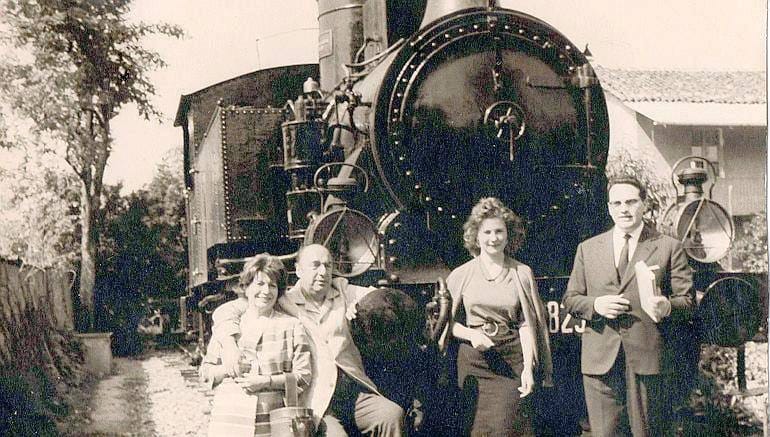 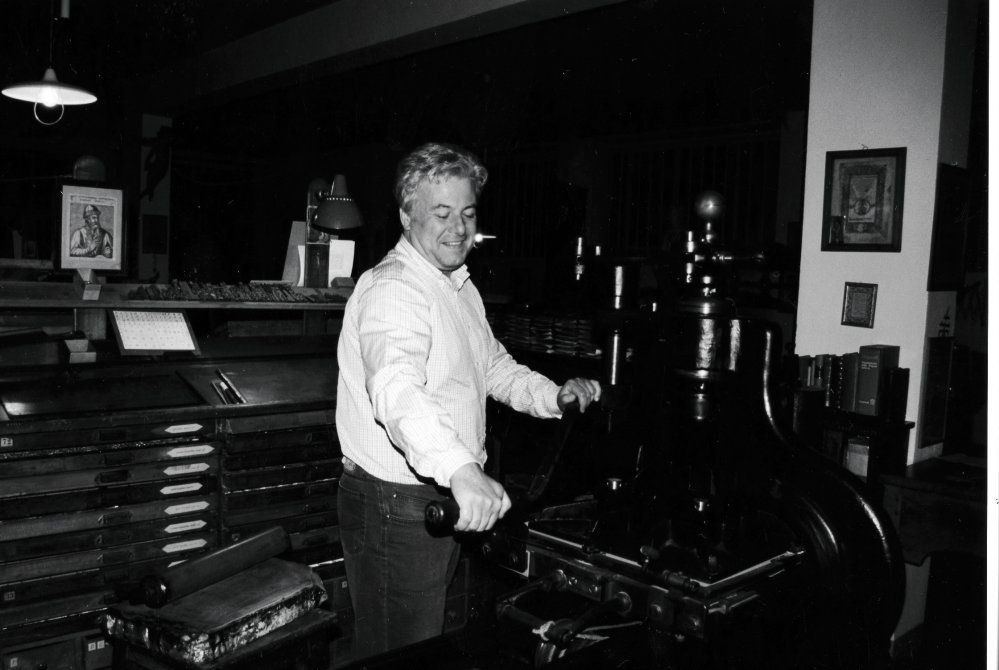 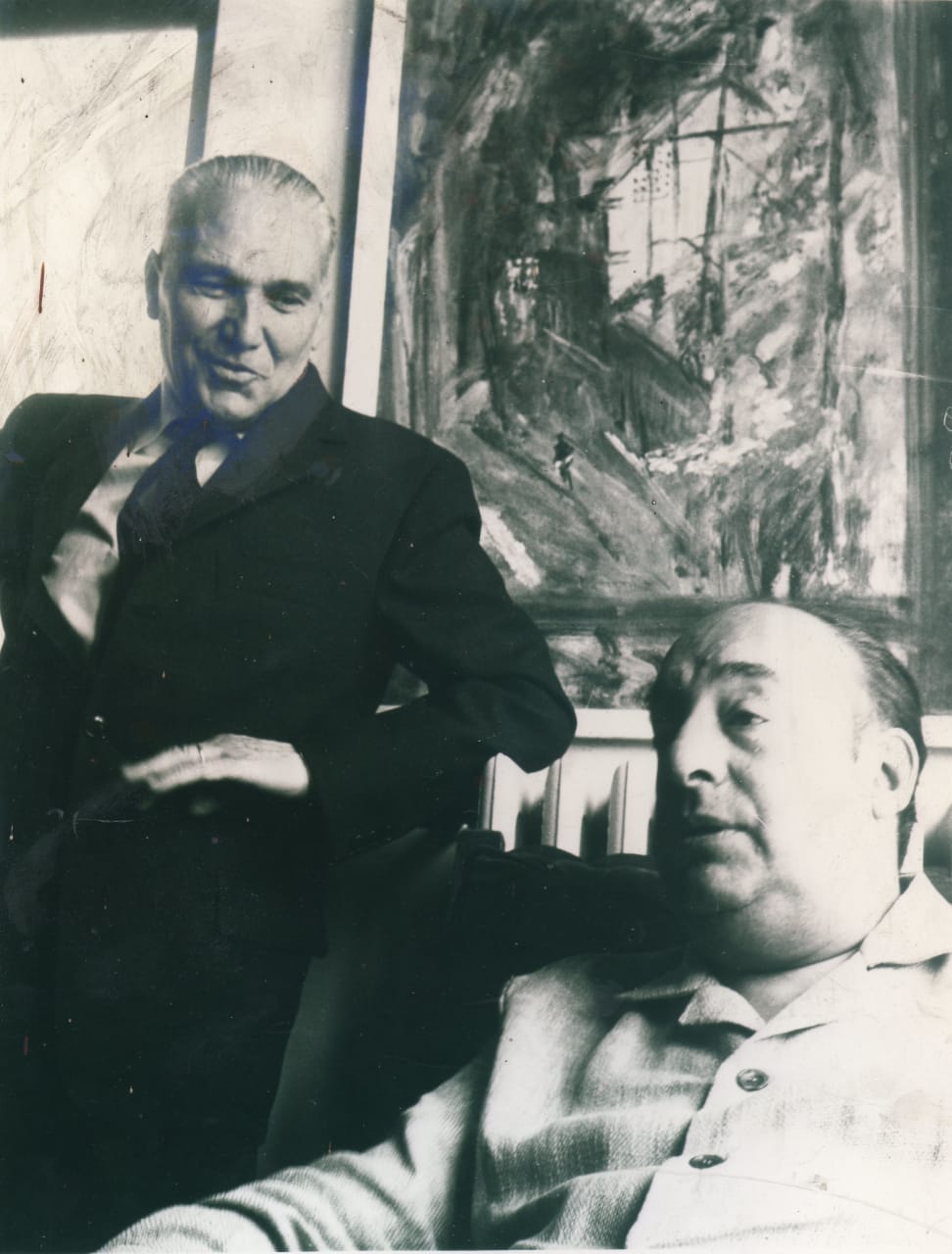 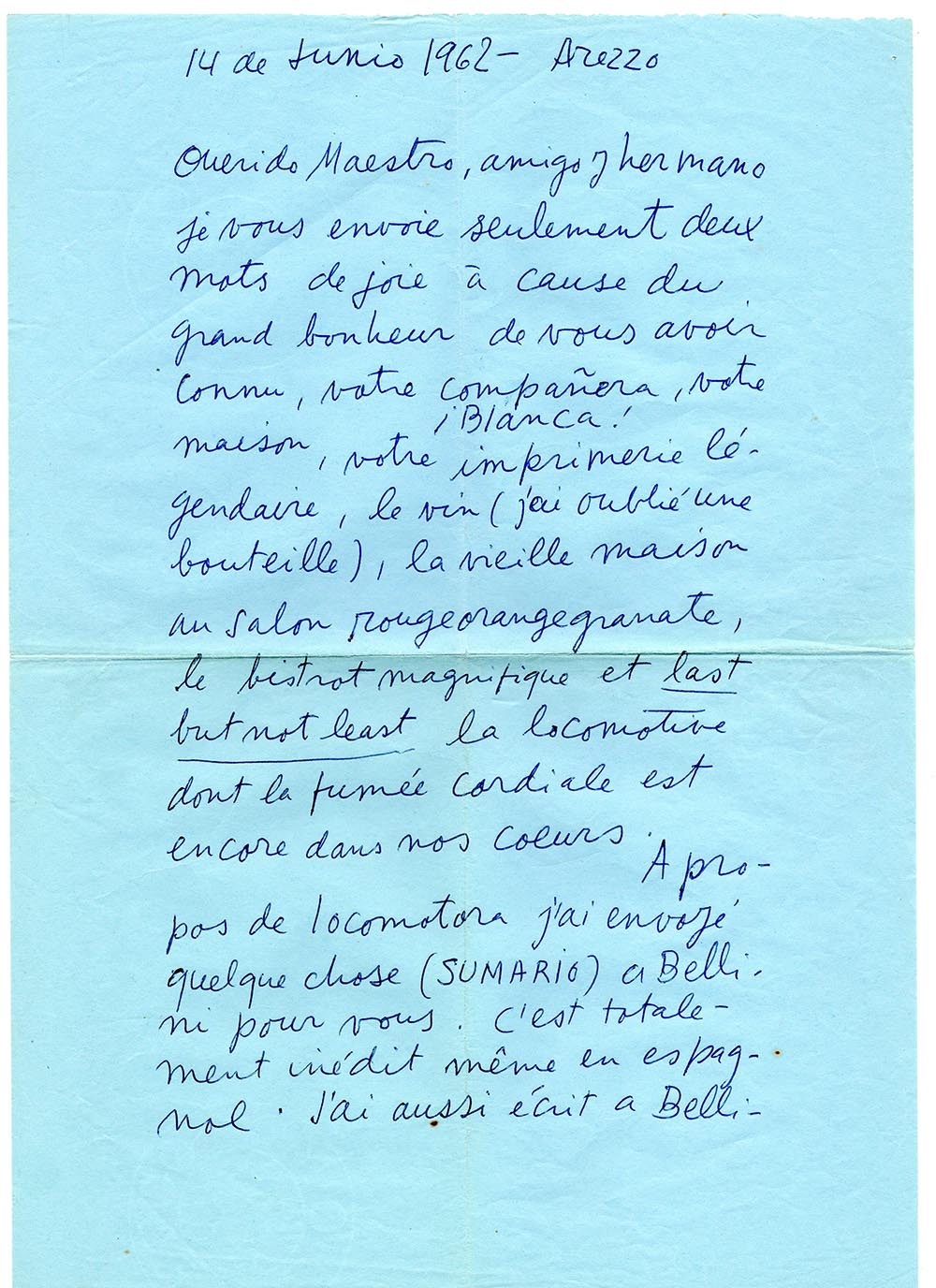 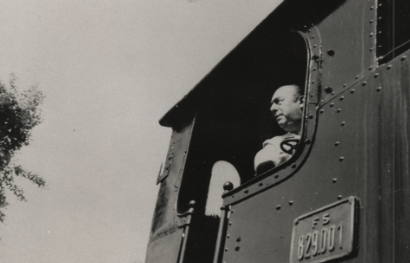 NERUDA, PABLO.
Que se despierte el leñador (1948)
Rome : Rinascita, 1951. 8 p. : ill. ; 28 cm.
Extremely rare extract from Rivista Rinascita containing the poem (previously published in Canto general) which in 1950 also won the World Peace Prize for Literature in Warsaw; the translation is by Mario Socrate and Dario Puccini. The illustrations in the text are by the painter Renato Guttuso, who also portrayed his poet friend during a visit to Rome.